WebRatio and IFML mentioned by the IEEE Computer Society

The IEEE Computer Society publishes on the August issue of "Internet Computing" magazine the article "Web Modeling Languages Strike Back" signed by Gustavo Rossi, Computer Science professor at the University of La Plata (Argentina) and director of the Laboratory of Research and Development in Advanced IT (LIFIA), which explains why IFML language has been adopted by the Object Management Group. 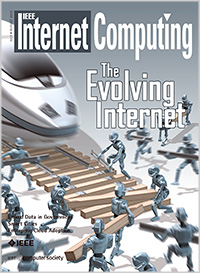 The IEEE Computer Society (Institute of Electrical and Electronics Engineers) is the most important information source for all professionals and experts in the Information Technology industry: professors, researchers, engineers, managers, and students. Members (about 100,000 in 2004) have unlimited opportunities to relate the most important professionals in the world and to contribute as authors and reviewers.

The institute, owner of the magazine and of the popular portal www.computer.org, has published the article also in the online version that you can read here. The new modeling language created and supported by WebRatio team is interesting because, as Gustavo Rossi writes, "IFML is an interesting new resource for Web developers [...] The smartest way to deal with Web software evolution's different facets is to use Model-Driven approaches that is, to raise the level of abstraction in which we think about Web Applications by using modeling rather than low-level programming languages, and derive programs "automatically" via model transformations. Using models to build Web applications gives us some additional advantages because we can describe complex functionality (such as Rich Interaction features) without delving into implementation details".

Stefano Butti, WebRatio CEO, commented: "It is a great honor for the WebRatio team to see its own company mentioned by one of the most important computer magazines in the world and reference point for industry professionals. The IFML language standardization represented a milestone in the path that WebRatio has been following in these years and the interest by IEEE Computer Society is certainly a reason of pride for our work."

< Back to stories archive